Dr. Mark’s Weekly Tip: Elastic Recoil Is Like Saving Money in The Bank

Elastic recoil leads to a more efficient transfer (and savings) of energy.

There is a lot of confusion around the term elastic recoil vs. braking in running.  A critical feature of efficient running is a strong and stable base of support.  Without this foundation, there can be no efficient transfer of energy.

Our tendons are highly adapted to storing and releasing energy under tensile strain.  Jay Dicharry uses  a slingshot analogy.  As runners we must land a bit in front of our center of mass to store the energy and it then releases as we push off the ground.  This isnot braking if done correctly.

Can we tell what the runner is actually doing with a video camera?  Not exactly as we cannot see forces?

But we can make some likely conclusions with slow-motion film as one can see a springy motion vs. a hard hit and resulting shock wave with an overstride.  Muscles lengthen and shorten in the overstride and slow cadence pattern and compromise the elastic storage, as does trying to pick up your foot too soon with active muscle contraction (this is sprinting). 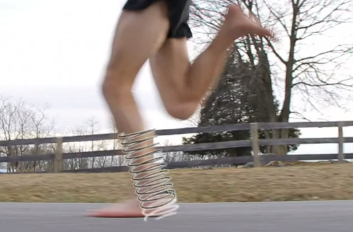 Rewatch this video on the “Principles of Natural Running”here. Do some of the drills shown in the video such as the jump rope and run with tether drill to learn how to land closer to your center. Also a must read is “Anatomy for Runners” by Jay Dicharry.