Hunter used high speed photography and video to analyze the foot strike patterns of runners in the 2012 Olympic trials. According to the article, the results were “all over the place.” I examined them myself as the photos and videos are posted on line. Photos are pretty much worthless because we can get a still image of anyone with their heel striking or forefoot striking at any given point and say that they are “heel striker” or “forefoot striker”. Now on to the video. Of the 23 runners that I reviewed on the video (click to view) only four of the 23 are truly “heel striking”. Of those four, only one of them is landing on an out stretched leg with the heel striking abruptly. The other three are engaging the spring mechanism by landing with their knee bent and foot below their center of gravity. In other words, they aren’t heel striking the way a typical recreational runner would in a traditional motion control running shoe. The other 19 runners are landing with various forms of foot strikes but definitely not a heel strike by any means.

And now Dr. Hunter’s study has found that the very fastest distance runners are often heel strikers (per author Gina Kolata) Is often 17% of runners? Definition: often |ˈôf(t)ən, ˈäf-| adverb frequently; many times. I wouldn’t classify 4 runners out of 23 as frequently or many times.

The other point is that they are moving with forward momentum so they are not truly heel striking as the traditional runner does (Click to see Pete Larson’s example of a heel striker from over striding). As we can see it’s more then just how the foot strikes. Also, these runners are in minimalist shoes/racing flats so they are not relying on the thick cushioned heel as traditional running shoes utilize to absorb shock.

A second study by Kram (click for abstract) found that by running barefoot and in Nike MayFly lightweight shoes that there was no difference in VO2 max. However when adding weight to the barefoot subject to simulate the weight of the Nike MayFly the VO2 max increased proportionally. I can’t believe this can actually be published! The VO2 max is the same with shoes and barefoot, but if we simulate the weight of a shoe by strapping weights to our legs, VO2 max increases.

Despite the added mass, we predict that running in ultralightweight but cushioned shoes should be more economical than running barefoot. But it’s not, remember? You did compare it and found no change in the VO2 max!

To summarize my thoughts, the article offers no proof for the benefit of running in cushioned running shoes and in my opinion was uniquely crafted favor the naysayers of barefoot or minimalist running. There is a big difference in running barefoot and running in minimalist shoes. The goal of barefoot running is to use it as a tool to develop proper form. Traditional cushioned running shoes inhibit the ability to run with natural or proper form. And yes, one most likely can run faster in a minimalist shoe. Lace up a pair of roller blades and you’ll probably go even faster. The point is to develop proper form and utilize a minimalist shoe to assist this. Cushion, motion control, stability, and arch support are not necessary. 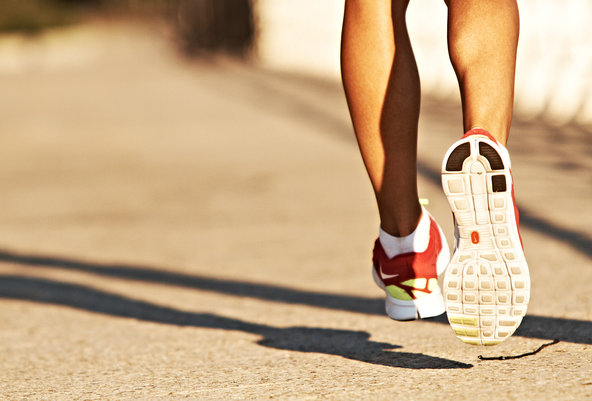 It’s a topic of endless debate among runners. Is there a best way to run, so that you use the least energy and go the fastest? And does it help to run barefoot or in minimalist shoes?

Most of the scientific research is just inadequate to answer these questions, said Iain Hunter, a biomechanics researcher at Brigham Young University. Some studies have indicated that the fastest middle-distance runners — those racing between about half a mile and a mile — land on the midfoot or forefoot. But for these runners, economy — using the least amount of energy — is not an issue, because the race is so short.

When people sprint or run very fast for short distances, they naturally change stride, landing more toward the front of the foot. But that does not mean running that way is better for longer distances.

Last spring, Dr. Hunter saw an opportunity to get some data on elite distance runners and to determine if there is a particular style they favor. Do they hit the ground with the heel, midfoot or forefoot?

Because he works with USA Track & Field, Dr. Hunter was able to get onto the field during the 10,000-meter Olympic trials. He photographed the runners’ feet with a camera that records 240 images a second. These were the fastest long-distance runners in the nation; if there is a secret to their success, he hoped the camera might show it.

“None of these things were connected with performance, nor with running economy,” Dr. Hunter said. That is good news in a way, because studies have repeatedly shown that when people try to change their natural running style, they tend to use more energy to cover the same distance.

Another biomechanics researcher, Rodger Kram of the University of Colorado, recently tackled the second question bedeviling runners. What about barefoot running or running in minimalist shoes?

Most recreational runners strike the ground with the heel first — even many who think they are midfoot strikers. But heel striking is just too uncomfortable when people run barefoot, so they change from heel strike to midfoot strike.

Proponents say barefoot running is more natural — humans evolved to run without shoes — and economical. When you lift a shod foot, you have to lift the weight of the shoe, and that requires energy. Added to that effort is the cushioning in shoes, which absorbs energy that should go into propelling you forward.

If you must wear shoes, the argument goes, the next best thing to barefoot running is to strike the ground with the midfoot and not the heel.

That still leaves questions about the importance of the weight of a runner’s shoes and their cushioning. In a study published this year, Dr. Kram and his students found that runners who wore very lightweight shoes were more efficient than those who ran barefoot. (The barefoot runners wore weights on their feet to mimic the weight of the shoes, so that this would not be a factor in the results.)

Runners wearing shoes used 3 to 4 percent less energy to go the same speed and distance as those running barefoot with weights on their feet. Dr. Kram wondered why — could it be the effect of the cushioning? The challenge was to separate the effect of cushioning from every other factor.

Dr. Kram figured out a way. In his next experiment, there was only one variable: the amount of cushioning for runners’ feet. All of his study subjects ran the same way, striking the ground with the midfoot. And all were experienced barefoot runners, which was important because none wore shoes for the study, to eliminate the issue of the weight of the shoe.

The subjects ran on three different surfaces while Dr. Kram and his associates measured how much energy their effort required: an old-fashioned treadmill that, unlike the modern squishy ones, had a rigid surface; the same treadmill covered with cushioning material about 10 millimeters —thick (about 3/8 inch), exactly like that used in shoes; and then covered with 20-millimeter-thick shoe-cushioning material.

It turned out that 10 millimeters of cushioning was best: The average subject used about 2 percent less energy to run at the same speed for the same distance with that cushioning, compared with running with no cushioning. There was a metabolic cost to running barefoot, and there was a cost to having too much cushioning.

Ten millimeters of cushioning is about the amount in many lightweight running shoes, Dr. Kram said.

He wants to try the experiment with heel strikers. But for now, he said, the message is clear. There is no best way to run for longer distances. And although many people think that lighter shoes are better and that it’s best to have no shoes at all, he said, “without cushioning it is not better.”

A version of this article appeared in print on 10/16/2012, on page D5 of the NewYork edition with the headline: Myths of Running: Forefoot, Barefoot and Otherwise.