Excerpt from New Book of Running Quotes: “1,001 Pearls of Runners’ Wisdom: Advice and Inspiration for the Open Road” 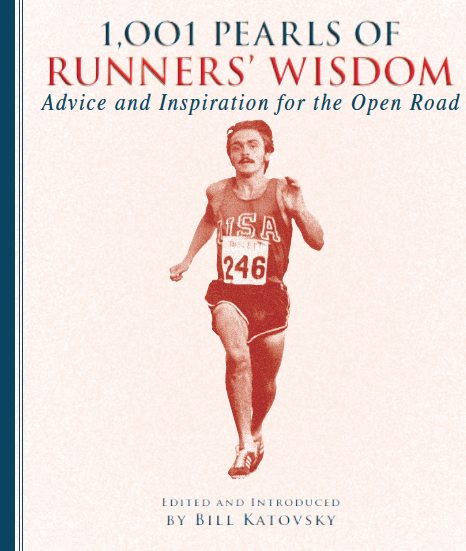 I admit that the past few months have been busy. In  addition to co-authoring “Tread Lightly: Form, Footwear, and the Quest for Injury-Free Running” with Pete Larson, I also edited and assembled a new collection of running quotes. And so I am pleased to announce that “1,001 Pearls of Runners’ Wisdom: Advice and Inspiration for the Open Road” has just come out. The “1,001 Pearls of Runners’ Wisdom” covers a wide swath of topics, including training, coaching,marathons, pain, injury, the mile, diet, and natural running. These quotes have been culled from numerous sources: Olympic champions, coaches, running legends, literature, Hollywood, bloggers, and more. There are even chapters on barefoot running, human evolution, and  women only. The following excerpt is from the chapter, “There’s No Business Like Shoe Business.” –Bill Katovsky

A runner’s two greatest loyalties are not to any shoe company or model, but to the left foot and the right.  —Joe Henderson, author and journalist

Sometimes . . . an injury may be due to increased running, fatigue, sickness, etc. and have nothing at all to do with your shoe. —Bill Rodgers

No doubt a brain and some shoes are essential for marathon success, although if it comes down to a choice, pick the shoes. More people finish marathons with no brains than with no shoes. —Don Kardong, author, journalist, coach, fourth-place finisher at the Montreal Olympic marathon

When I was about 14 or 15, and running in a pretty muddy cross country race, one of my shoes stuck in the mud and came off. Boy, was I wild. To think that I had trained hard for this race and didn’t do up my shoelace tightly enough! I really got aggressive with myself, and I found myself starting to pass a lot of runners. As it turned out, I improved somethinglike twenty places in that one race. But I never did get my shoe back. —Rob de Castella, won the 1981 Fukuoka Marathon in a world-record time of 2:08:18

Shoes do no more for the foot than a hat does for the brain. —Dr. Mercer Rang, orthopedic surgeon and researcher in pediatric development

The ideal shoe would provide enough support for a runner during a race, but would fall apart once that runner crossed the finish line. —Bill Bowerman 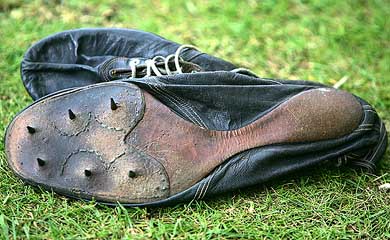 Roger Bannister’s actual track spikes that he wore when he ran the first sub-four-minute mile in 1954.

Your spikes, which were really quite long then, would catch the material of the track and your shoe would get heavier. I was simply filing them down and rubbing some graphite on the spikes. I thought I would run more effectively. —Roger Bannister

If you want shoes with lots of pep, get Keds. For bounce and zoom in every step, get Keds. —Kedso the Clown, from 1963 Keds television commercial

I would advise that each runner leave shoes and stocking sat home, but of course this should be optional with the individual; next to bare feet are sandals, next to sandals moccasins, next to moccasins, soft, low shoes. —J. William Lloyd, who in 1890 wrote the first treatise on running

Motion-controlled shoes and orthotics are like putting a cast on a broken limb. The pain may stop, but the longer you use it, the weaker you get. —Steve Sashen, founder of Invisible Shoes

Each time you try on a pair of shoes, find a hard surface to walk on rather than the thick soft carpet in shoe stores, where almost any shoe will feel good. If there’s no sturdy floor to walk on, ask if you can walk outside (if you’re not allowed, shop elsewhere). —Dr. Phil Maffetone

Abandon the notion that you have a shoe size. Instead you have a foot size. Shoes are made all over the world and apply different shapes and standards. —Dr. Mark Cucuzzella